John’s bareknuckle days began with fist fights as a youth, onboard ships in the Navy and a period as a bouncer. His first Pro Match was in 1980, when he won the Tough Guy Contest at the old Buffalo Auditorium. I was in attendance that night. I’d meet John years later at the VA Medical Center. He had also become proficient in boxing, kick boxing and Tae Kwon Do (earning a Black Belt). My rendition is meant to be an up close and in-your-face encounter. 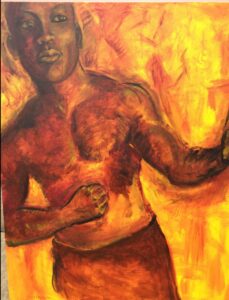 Jack Johnson became the first African-American world heavyweight boxing champion. However, as was the case with many boxers, he began his bareknuckle fighting days as a child. He would compete in Battle Royales. These involved blindfolded African-American youths who fought each other until one was left standing. 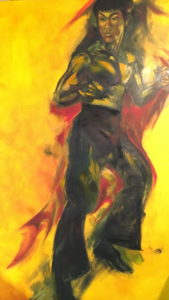 Certain individuals radiate art through form, movement and expression. I’ve always felt that way about Bruce Lee (and Jimi Hendrix). I wanted to combine features of a dragon without crossing over into a comic book style. The claws, wings and tail are subtle yet evident. 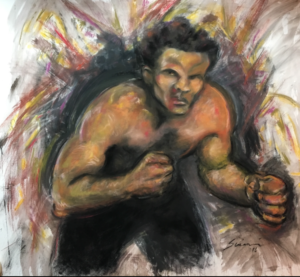 I tried using the same approach with Brawer as I did with a Brush With Bareknuckles. The only problem was that I pinned the paper to a plaster board wall. Punching and dragging knuckles on that surface didn’t draw anything but blood and a bruised hand.