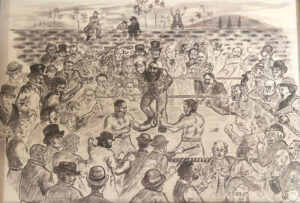 A new addition to my Brush With Bare Knuckle series. I’m focusing on the faces of onlookers in some of these pieces.

Expression is everything. Picture a Sunday morning in Great Britain. The sun is shining, the countryside is fresh and peaceful. The crowd gathers and surrounds a makeshift ring, assembled for a bareknuckle boxing event. Each face expresses a range of emotions from joy to anger. 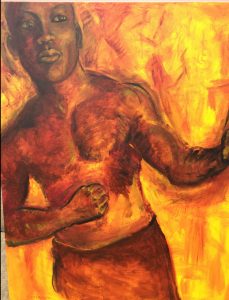 The fighter Jack Johnson was one of those fighters who had crossed over to the gloved era.

Jack Johnson became the first African-American world heavyweight boxing champion. However, as was the case with many boxers, he began his bareknuckle fighting days as a child. He would compete in Battle Royales. These involved blindfolded African-American youths who fought each other until one was left standing.