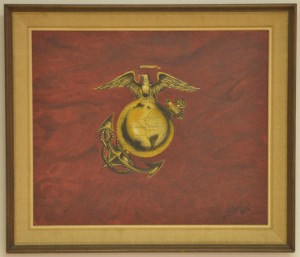 An old High School buddy and Marine Vietnam Vet, Joe Massaro, has loaned me this piece for the show. It was painted in 1968, the year that I had joined the Corps. After 46 years, I have decided to title it. (Not for Sale)

The term “ Dust off ” is used for an emergency helicopter evacuation of casualties from a combat zone.

As the first piece of this series, it gave me direction and an opportunity to expand.
Zaha Hadid is an amazing architect and artist. Her work is a source of endless inspiration.

I will never forget the monsoon season in Vietnam. It rained and rained, so hard. It seems as though we were wet for months and our fighting holes would fill. When we were dug-in on a hill, we would dig trench systems that would avert some of the rain water from our fox holes. We all had immersion foot. What we would give for some dry socks. They would last a very short while, but for that time, they were heaven-sent.

Translated from German, The Storm, is a nod to the Futurists of that country and time.

This is a ‘rip-off’ of Picasso’s Goat painting. There is no other way I’d choose to phrase it. I saw his piece and wondered how it would translate into an Eagle, Globe and Anchor. His colors and use of space were what drew me to this experiment.

A cadence is the measure or beat of a rhythmical flow. This piece is a tribute to our drill instructors and the countless hours we’d spent on the drill field in Parris Island. It’s hard to believe how their tempo would, at times, be lyrical after a chaotic rant.

This is the study for Conceptual Regeneration I. What you see is the tip of the iceberg. There’s quite an evolution going on under this drawing.

Flesh and Blood; A Tribute to the Corpsman

What can any Grunt (Infantryman ) say about the Corpsman (or Army Medic)? They’re a breed apart. When all hell is breaking loose and everyone is taking cover to return fire, their up and attending to the wounded.

Our Corpsman were not doctors. Many had no medical experience, other than the abbreviated training before their tour in Vietnam. As a matter of fact, I’m not sure that I have ever met one who’d actually joined the Navy for that particular duty. They were and are precious to us.

“Devil Dog” was the name given by German troops to describe the fierce nature of attacking Marines in the Battle of Belleau Wood in WW I. The moniker is one of many that remained fondly through the years.

The word Cammie’s refers to the camouflage utility uniform worn in the jungle.

Translated from Latin, this is the “standard and standard bearer”. Thoughts of combining the standard-head of the Roman Eagle with the Eagle, Globe and Anchor had intrigued me for many years. This series gave me the opportunity to explore it further.

While in Tampa, Florida, I made two visits to the Dali Museum in three days. My search for inspiration was fulfilled.