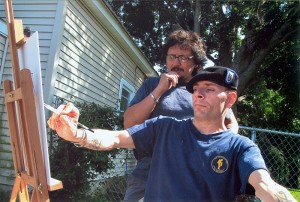 Mark Kline is a 38-year-old disabled Army Veteran living in Mexico, NY.  Mark became sick while stationed at Ft. Lewis after returning from his tour in Germany and Bosnia.  Mark was diagnosed with a rare genetic disorder called Wilson’s Disease.  It is characterized by the body’s inability to metabolize copper and stores it in the heart, liver and brain until it reaches a toxic level rather than passing it through.  Mark was born in Costa Rica and adopted to an American family at 18 months — the disease was undiagnosed until Mark became sick.  Wilson’s Disease causes neuromuscular problems with all four limbs, muscle spasms, and the inability to speak and/or swallow.  Mark ambulates with a wheelchair, and in his spare time enjoys painting, sketching, snow and water skiing (in a sit down ski), and his beautiful pug named Sage.