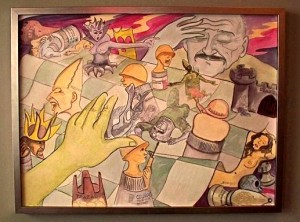 Chess is one of my favorite pastimes. In the right frame of mind I’m at best a mediocre player. The occasional game that I play is usually a lesson in humility.

About a year ago I began to see a correlation between chess and life through medications. As a Creative Arts Therapist at VA Western New York Healthcare System, I’m afforded many opportunities to observe the effects of various prescribed drugs on my patient population. The depths of my observations have been reinforced by comments, regarding the drugs, made by the patients who use them and the staff who administer them.

There is of course another contributing factor that strengthens my understanding of prescribed medications for mental health issues. I have continued to work through the many afflictions of PTSD since my tour in Vietnam. I have encountered both good and bad medicine, one works the other does not. Finding those that work plays an integral role in the recovery process. Over a period of time, the good medicine may no longer be as effective and adjustments must be made to maintain a healthy program of recovery. These adjustments, at times, can create upheaval. What once worked simply does not anymore. However, there is nothing simple about a life or death situation and readjustment of meds may present an individual with exactly that.

Hence came the title, “Strategy for Surviving the Day,” long before the images appeared on paper.

The final piece shows two people engaged in their own strategies for success. Originally they were both Veterans. After its completion, a friend suggested that the perplexed face might belong to the doctor who prescribes the medications. I chose to allow the viewer to entertain both reflections. It is however interesting that working with ones doctor is an across the desk/table experience.

Through interviews with various clinical staff and other forms of research, I had developed a listing of drugs that are used in treating mental health patients. I used the weaker strength pills to represent Pawns. As the power of the med increased so did the effectiveness of the chess pieces, from Knight to Bishop, to Rook and finally Queen and King. Some of these pieces express the horrors of war and the tragedies of the fallen through meds that are not working. Other pieces show a determination to keep persevering and perhaps trying the new prescriptions. One  Queen lies stricken, off of the board, as one who may have given herself so that her King would win; while the other (in the top left corner) displays the protecting instinct of a woman  standing before her King while her security is under attack.

There is no winner or loser in this game. The battle rages on.