The subjects may appear to be separate from each other. However, “Cool Nude” and “Bird With A Smile” were created simultaneously. There’s a certain energy when things click in the studio. I liken it to long distance running. After so many miles, one reaches a high that elevates both physically andmentally (spiritually, if you’re lucky.)

I found myself in that sacred zone when thoughts of “Self Portrait At Terminal Velocity” began to stir. While the first 2 pieces have strong similarities, I felt a need to further intensify. What experience would channel my energy onto canvas? I immediately thought of freefalling. One is never so alive as when they are descending at 120 mph in a frog ( arch position.) Somehow, that still wasn’t enough to express the feeling. A skydiver in freefall pulls their arms to the sides and legs together to achieve terminal velocity ( or to track.) Once this occurs, the individual no longer rides a column of air straight down. Instead, the body acts as a missile, falling across the sky at speeds of 180-190 mph. The body is bucking and the face is pulled back.

Using heavy applications of paint, I was able to show the figure ripping into a tranquil sky. I’d suggest zooming into the image on your screen to better appreciate the effect. 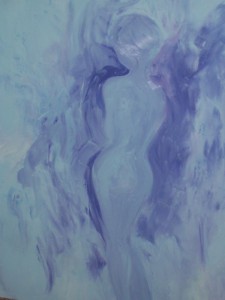 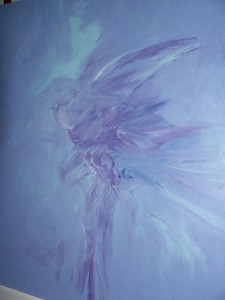 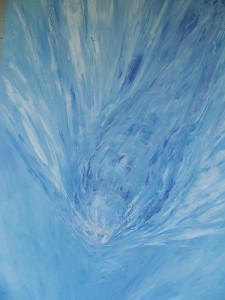 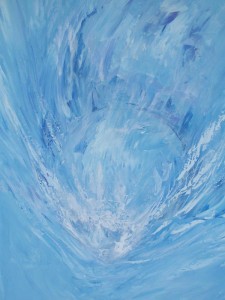