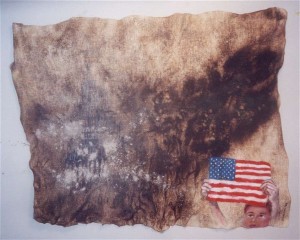 A response to the September 11th terrorist attacks, this piece was part of the “MISSING” exhibit shown in cities across the United States and internationally.

Richard Gabriel was a fellow Marine who served in my company in Vietnam. He lost a leg there.

On September 11th, 2001, he was onboard American Airlines flight 77, which crashed into the Pentagon.